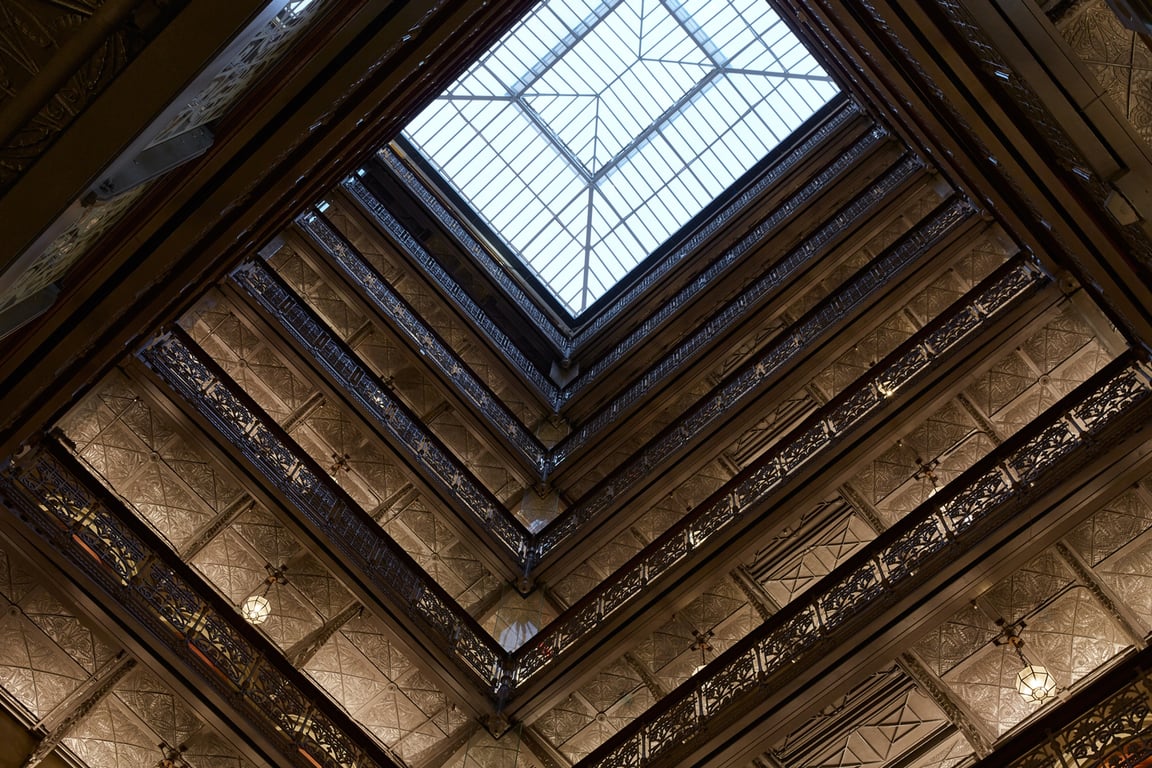 The narrow streets around the Brooklyn bridge area have long been considered a sleepy town. But the reopening of a New York landmark as the now jaw-dropping Beekman Hotel is splashing a fresh coat of urbane desirability for the up-and-coming neighborhood. The Beekman Hotel’s late renaissance-inspired terracotta façade had long been wantonly admired from afar. Not to mention it’s iconic pyramidal skylight that likely earned it it’s landmark stripes as an architectural gem.

The Beekman’s pyramidical-skylight floods the hotel with natural light.

But after three years of restoration, its guests can now admire the Victorian era railings, circling a towering 10-story atrium enclosed by the aforementioned skylight. Packed with 287 rooms, plus a historic 1800’s look and feel, 45 suites and two duplex “Turret” suites with roof access, the hotel is hard to resist. And if the Beekman Hotel’s suites alone aren’t enough, well, you’re a tough sell, but here’s some more reasons:

First known as Temple Court, the building was designed by architect James Farnsworth and completed in 1883, quickly becoming a model of white-collar industry. Over 200 businesses flocked to what was then one of Manhattan’s first skyscrapers. Today’s hotel guest rooms were once crowded with busied accountants, lawyers, publishers, press agents and even the likes of budding writers like Edgar Alan Poe.

In its heyday, the Temple Court once housed the New York City debut of Shakespeare’s Hamlet. Sadly it’s bombastic popularity ended in the 1950’s. The building’s interior offices were re-outfitted for the modern office space and its central atrium was boarded up. The building was declared a landmark in 1998 but became vacated and ignored. Finally, GFI Capital bought it for $64 million, along with a ten-story annex, for $22 million in 2012. Thus, reinventing the nine-story structure into the Beekman Hotel and its annex into a 51-story luxury condominium.

The Beekman’s interior combines a careful selection of elements to exult it’s past.

Staying At The Beekman Hotel’s Suites

The Beekman Hotel is a masterpiece of carved wood paneling, metal grilles patterned with leaves, elegant moldings and steel-cast chandeliers that lend an industrial-vintage feel. At the base of the atrium is a lobby and bar with plush seating. If you make your way up you’ll find the hotel rooms tucked around the atrium. Further up are the Beekman Hotel’s suites and the eye stopping pyramidal skylight, flooding the hotel with natural light.

The Beekman Hotel’s suites remain true to the building’s historical charm. The suites span up to 600 square feet and include leather-lined headboards, marble-tiled bathrooms, and a marble walk-in shower. The subtle accents of felt in decadent colors, light wood armories, and cocktail crafting table, bring together supple elements of the contemporary and the classic.

Other features of the suites include high ceilings, marble-tiled bathrooms with rain showers. Additionally, booking the Corner Suite includes a courtesy car with a driver at your disposal.

The regal sophistication of the Beekman Hotel’s suites is quintessentially New York, along with the enrapturing historicity of the building that houses them. If there is a definitive modicum of what it means to offer a luxury vacation stay, then the Beekman Hotel has exalted it. Come for the award-winning chef-run restaurants, come for the historic appreciation, come back again and again. And of course, you know where to book. Safe travels!