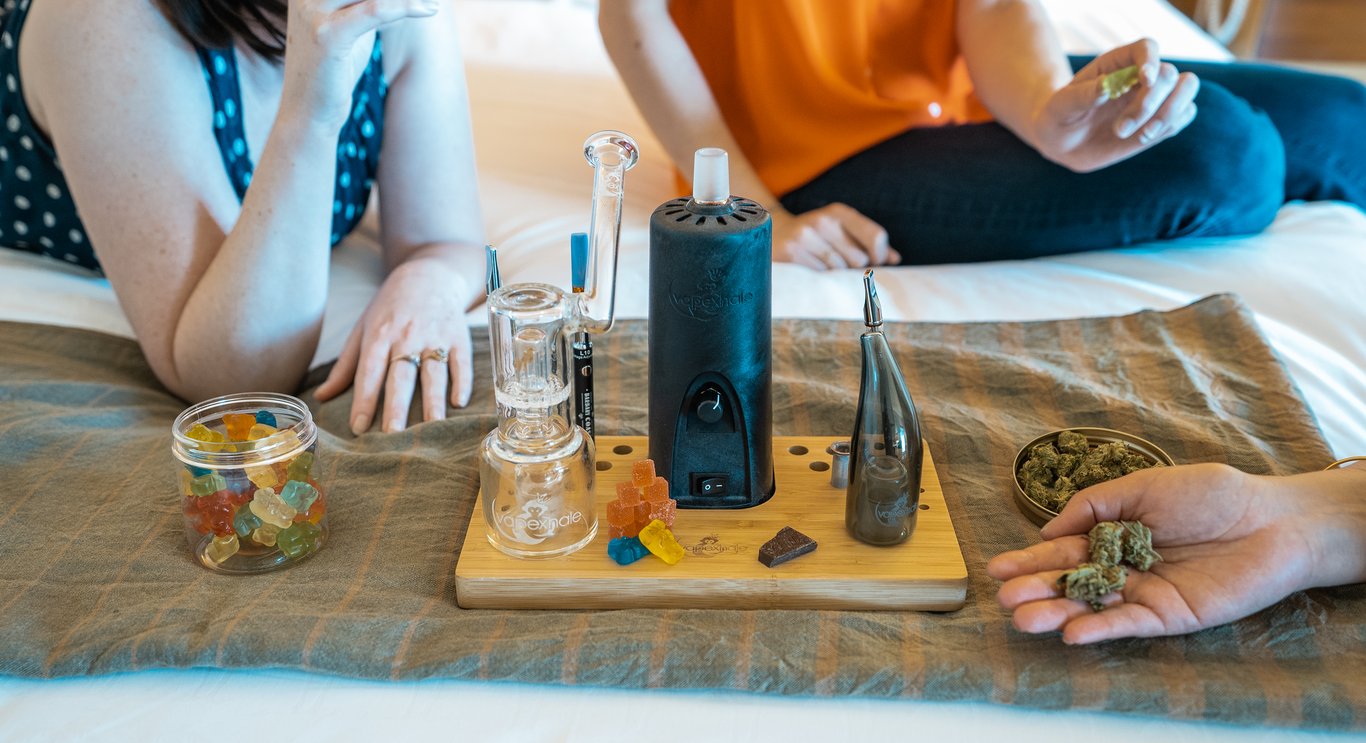 Does your dream vacation include getting high—legally? Thanks to recreational marijuana being legalized in ten states and growing, your stoned sojourn is within reach. How simple it is to plan your dream weed vacation depends on where you want to go. As you probably know if you love Mary Jane, cannabis laws vary from state to state and it’s still illegal on a federal level. That makes consumption tricky in cities like Las Vegas, but not impossible. Using our below guides on how to get high in Las Vegas, San Francisco, Los Angeles, and Denver, nothing will harsh the mellow of your green getaway.

Know Before You Go
Bring your ID as you must be 21 years of age or older to buy legal marijuana. You can’t light up just anywhere, in fact, it is illegal to smoke cannabis in your hotel room and in almost any public place—with the exception of a handful of cannabis lounges in the United States. The few places that do allow you to publicly consume are often BYOC (bring your own cannabis), due to laws restricting the simultaneous sale and consumption of marijuana. Most dispensaries carry a variety of products, including dried marijuana — aka flower, bud, or leaf; edibles; hash tinctures; concentrates; hash and CO2 oil; and topical treatments. If that sounds confusing, a budtender can point you in the direction of what’s right for you depending on your experience, tolerance, and desired effect. Pace yourself so you have plenty of energy for important stoner activities like finding bacon-maple doughnuts at 3am. The amount of flower you can buy is limited, usually to an ounce (that’s a lot!), but you should only purchase what you can use if you traveled by airplane—it’s illegal to cross state lines with cannabis products even if you’re flying to a state where it’s legal.

Denver
The Mile High City has been slinging legal weed since 2014 and it’s a top spot for travelers looking to soak up natural beauty while they enjoy marijuana. With the Rocky Mountains to the west and the High Plains to the east, Denver has incredible views and premium cannabis. Denver is an OG weed city—one of the first with legal marijuana in the United States—and as such offers a ton of experiences for the weed adventurous. Read more here.

San Francisco
The birthplace of the Summer of Love was also the first city in the United States to form a cannabis legalization initiative (in 1964). It took until 2018 for legal recreational marijuana to become a reality, and today San Francisco is home to the most cannabis consumption lounges in the United States. It’s currently the only city where you’ll find an Amsterdam vibe with the ability to buy and smoke marijuana in the same shop. Live your best-stoned life in the City by the Bay with our tips on how to make the most of your trip. Read more here.

Los Angeles
When Dr. Dre and Snoop Dogg rapped “It’s California love, this California bud” on “The Next Episode,” Cali was still a long way off from legal recreational marijuana. In 2018, recreational weed shops in Los Angeles opened their doors and a new breed of pot culture was born, giving us cannabis flower crowns (perfect for Coachella), ganja yoga, and even stoner celebrity tours. Read more here.

Las Vegas
The city created with a pleasure-first mentality gained another way for visitors to cut loose when recreational cannabis became legal in 2017. Since then, Vegas has been hosting weed-themed bachelor/bachelorette parties, baked family reunions, and corporate stoners sneaking away from their conference to take a toke. Due to gambling, Vegas has more rules than the average weed destination, but with our tips you’ll soon be staring at those glittering lights without a care in the world. Read more here.