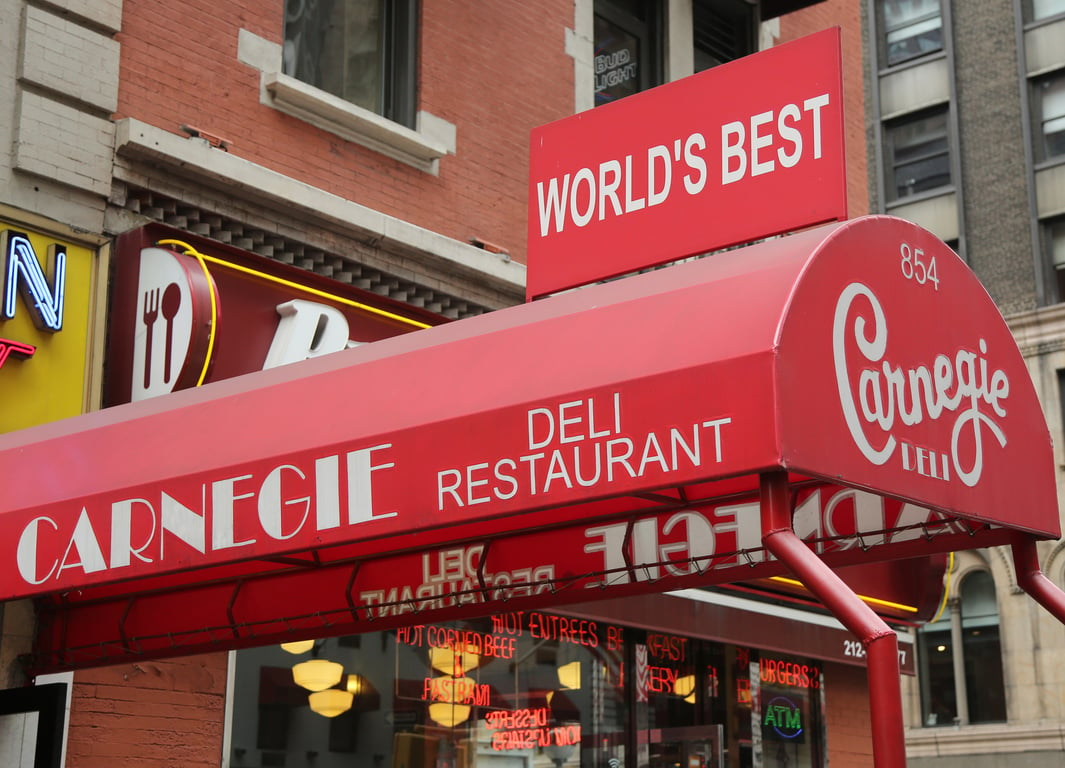 E. B. White once proclaimed that anyone wishing to live in New York should be “willing to be lucky.” The same still holds true for anyone planning to eat out in the city. New York caters to just about every palate and price range. With a load of Michelin starred restaurants and sometimes equally famous street foods, we thought we'd pay tribute to both. So here's our take on the top fine dining experiences, along with the must-try casual eats.

Few restaurants garner the acclaim of the top restaurant in NYC as consistently as Le Bernardin. The prix fixe only menu is described by some critics as "ethereal," and although it might make a dent in your wallet, the blissful splurge is a "sine qua non" experience for anyone visiting the city.

In a soaring art deco space in Madison Square Park, this Michelin star restaurant offers an exciting seasonal 8-10 course tasting menu focused on local ingredients. The flat fare includes all but beverages, although the superb wine pairings will only heighten your experience. An epitome of fine dining, Eleven Madison Park is a culinary event.

Featuring delicacies like foie gras and lobster with black trumpet mushrooms and impeccable service, this beautiful "formal affair" is a bucket-list experience. Naturally, the tab will run you some damage, but the $55 prix fixe lunch is a great deal and a more affordable option.

Locally sourced from their own farm, Blue Hill redefines the "farm-to-table" spectrum. With assuredly fresh ingredients, their menu yields spectacularly nuanced and delicately prepared seasonal plates that incite newfound respect for culinary craft. A definite splurge, this intimate eatery is a rare gem.

An incomparable experience, this restaurant offers a service akin to a choreographed dance, while delighting their customers with a life-affirming nine-course menu. The set price might have you calling your broker, but the electrifying park views, uber-elegant decor, and unforgettable food is well worth the superlatives.

For a little something special, we've broken down a casual eats' list by neighborhood, so you'll have something to try on the go as you tour the city's distinct areas

Creamy to almost succulently goopy filled pizzas that go from its signature artichoke pizza, to crab and vodka sauce. This is a no trick joint that will serve you up fresh super-filling slices (we dare you to eat two) of gourmet pizza. Great for a quick bite on the east village or a late night guilty pleasure while you're out on the town.

Have a taste of West coast street food at this always-packed corner spot. Dishing out hand-pressed tortillas with spit-roasted adobada pork and sweet pineapple batons, this sweet taco spot offers a succulent eat under $5. Take it from us and try some of their creamy guacamole while you're at it. For everything else, there's Chelsea Market

New Yorkers don't like waiting, so it when you got em lining round the block for burgers, you know it's something special. These legendary, mouthwatering, wholesale size patties are char-broiled, drizzling with American cheese and piled on high with crispy bacon for a "mouthgasm" experience. This is vintage New York at it's best.

SoHo is packed with quick eats, but we thought we'd offer something on the lighter side. These airy dosas are filled with both western and more traditional ingredients, like curried chicken or a vegetarian option like roasted peppers and goat cheese. Making for a perfect grab-to-go bite that won't overfill but is still bound to please.

Drop in for some central-Texas style meat at this hipster roadhouse joint. Slow roasted in a wood-fired oven with timber shipped from the Lone Star State, the brisket and ribs are cooked to melt-in-your-mouth-like-butter perfection.