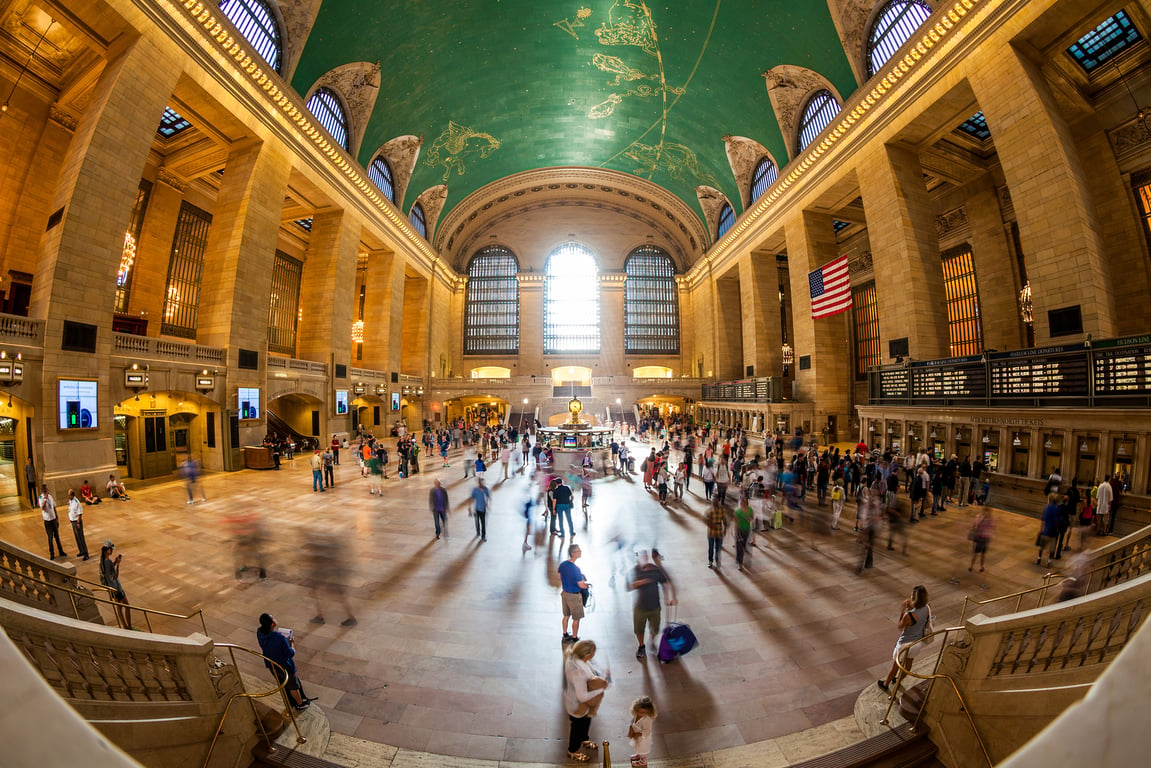 This grand beaux arts building was first opened in 1891. It now serves as Manhattan's busiest commuter train station and is one of the world's most visited tourist attractions. Although expanded and rebuilt throughout the years, its main features remain intact. On the main concourse, an astronomical ceiling depicts the zodiac signs and a wealth of stars. While outside, an impressive facade boasts a beautiful set of statues atop a colonnade.

Stretching a massive 843 acres across Manhattan, this park is regaled by many as the lung of the city. Conceived in 1857, the park opened its first section to the public in 1858, and went on to be declared a national historic landmark. It is now the most visited urban park in the United States, with roughly 40 million visitors a year. A spectacle throughout all four seasons, the park is ablaze with enchanting color during the early fall and spring.

This 1,050 feet building was completed in 1930 and has since become one of the most renowned examples of Art Deco architecture. Briefly heralded as the world's tallest building (succeeded by the Empire state in 1931), a stunning set of gargoyles guard the corner of the 61st floor, while the floors past the 71st rise into a spire that once hosted a mile-high members club and speakeasy.

At 1,454 feet (102 stories), this iconic skyscraper was a feat of engineering, and the world's tallest skyscraper for over four decades. It now features tours to the main deck and top deck, where you'll get a breathtaking 360 view of the city. Although open year-round, the outdoor decks are sometimes closed during the winter. So we recommend picking a warm, clear day to visit.

Conceived by American philanthropist John D. Rockefeller Jr., this massive project breathed life into the Great Depression's worst years, employing around 40,000 people during its construction. Visit during the holidays to see the grand Christmas tree, annually lit every year to welcome the holidays. You'll also find an ice skating rink, shops, restaurants and the Top of The Rock observatory, featuring a spinning restaurant with stunning city views.

The iconic church first opened the public in 1879, featuring neo-gothic spires that rise to 330 feet, pews to accommodate 3,000 people, and a brick and marble structure that spans an entire city block, between 50th and 51st streets, and Madison and Fifth avenues. This renowned church has been known for its popular patrons, for example, hosting the wedding of acclaimed writer F. Scott Fitzgerlad to his wife Zelda in 1920.

Designed by architect Daniel Burnham and completed in 1902, this iconic steel-framed structure was quickly popularized by its peculiar wedge shape. Erected in the triangular plot that intersects Broadway and Fifth Avenue, the Flatiron's consistent design from top to bottom set itself apart from the bulkier, fortified bases of most buildings of its time.

Looming over New York City’s East River, this marvel of engineering and national historic landmark opened in 1883 and linked the boroughs of Manhattan and Brooklyn. To prove its safety, authorities had a circus entertainer herd 21 elephants across the bridge. For good views of the Manhattan skyline, walk from the Brooklyn side over to Manhattan. The best times are in the early morning (to avoid the crowds) or in the evening, to watch the sunset over the water.

Despite being one of the smaller parks in the city, this densely used green space, with the beautiful Washington Square Arch inside it, is a hallmark of the city. Visit during the warmer times and you'll find a lively crowd of local students, families and street artists.

This famous monument was a gift from France to the U.S. to commemorate the U.S. independence from the British empire. Standing 300 feet tall, the statue has a 7-ray crown that represents the seven seas and continents, while one arm braces a tablet inscribed with the date “July IV MDCCLXXVI.” For the full experience, purchase your tickets in advance and visit the crown, pedestal, and the liberty museum.