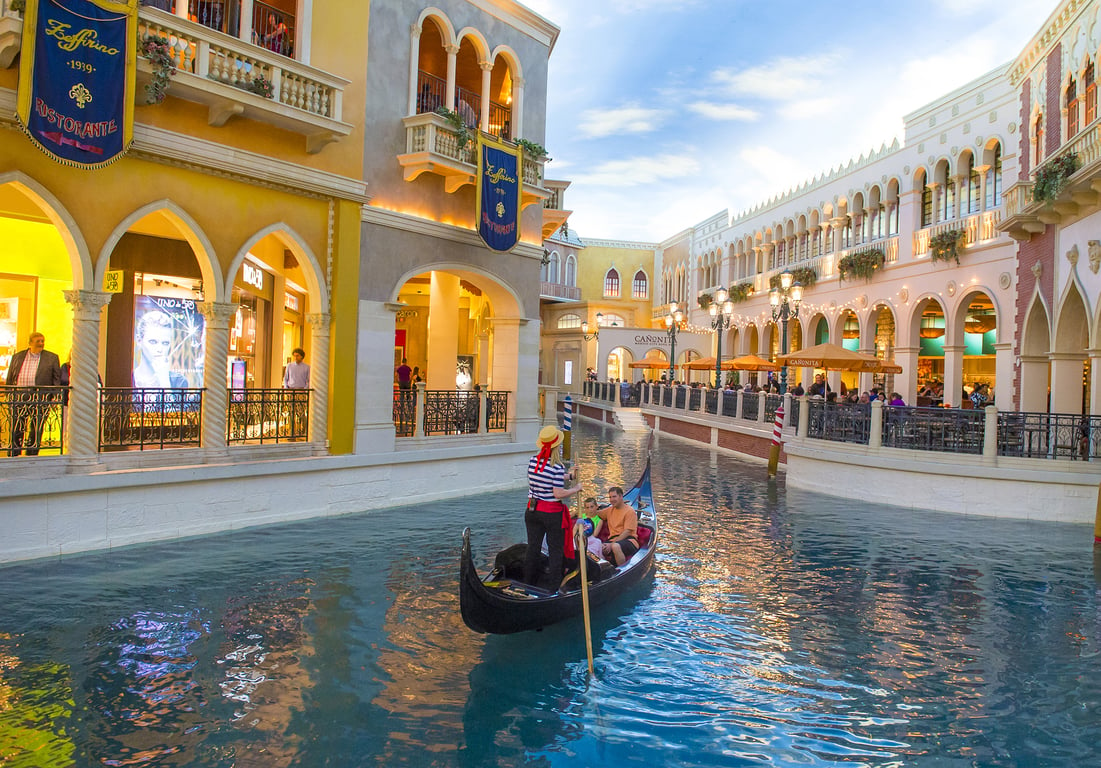 
Las Vegas locals are regularly spoiled with an endless supply of shopping destinations. Of course, it's no surprise a cosmopolitan city like Vegas has just about everything in the way of therapeutical retail. Shop or not, Las Vegas shopping outlets and stores are as much a treat to simply ogle around and window shop, as they are a good place to break the bank. Check out our Las Vegas shopping guide to get the scoop on the best stores in Vegas.

The Forum Shops at Caesars | The Strip

Arguably raking in the highest per square foot revenue of any other shopping center in the nation, the Forum Shops are a feat of Roman-inspired design. Classical pillars, statues, and a huge replica of the Trevi Fountain rise above a massive complex, with over 160 boutique stores. With its impressive design and riveting atmosphere, the Forum Shops at Caesars Palace are an attraction of their own.


The Cosmopolitan | The Strip

Catering to the trendily urbane local crowd, and all chic travelers, the stores at The Cosmopolitan of Las Vegas are as refined and unique as the rest of the hotel. With a number of unusual shopping options, major designers, and a vertical layout that boasts three floors of retail space around a royal, shining, shimmering chandelier of epic proportions, these stores are worth a visit if nothing else.


The Shops at Crystals | The Strip

Another Las Vegas shopping mall, another jaw-dropping feat of design. Complete with celebrity-favored designer stores, soaring ceilings, and expansive open spaces, awash in white stone, Crystals is an indisputably great shopping destination. Its convenient location alongside the Aria Resort & Casino also offers up a wealth of optional activities: spas, pools, upscale restaurants and enough to make a day of it.


Grand Canal Shoppes at The Venetian | The Strip

An exquisitely picturesque shopping center, the Grand Canal Shoppes are modeled after the famously beautiful city of Venice. Cobblestone walkways line a quarter-mile-long Grand Canal while singing gondoliers ferry visitors through the center, and its 160 luxury retail stores. While away the day at the shops, or visit the adjoined Palazzo Resort, equally luxurious and rife with dining and entertainment options.

Las Vegas shopping outlets aren't as hard to find as one might think, just off the Strip, are Las Vegas Premium Outlets South. A welcome alternative to its sister outlet mall near downtown. And with 140 stores and endless deals on brands like Calvin Klein, Nike, and Hugo Boss, they're an ideal stop for some good ole' discount shopping in Las Vegas.

Earning its mention just for its sheer size and the long list of offerings, Fashion Show is the largest Las Vegas mall, and one of the largest in the country. With over 250 stores, seven premium department stores, and a host of dining options, this a place any shopper ought to visit.

In keeping with Wynn's penchant for overt extravagance, the Esplanade is a red carpeted—falmboyant space of high-end retail. Housed in approximately 75,000 square feet of retail space, you'll find the likes of Alexander McQueen, Oscar de la Renta, Chanel, and a Rolex store offering the largest selection of timepieces in the country. Although it's a little further up the Strip, Wynn Esplanade is one of Las Vegas' best shopping malls.


The Shoppes at Mandalay Place | The Strip

An impressive retail and dining space, The Shoppes are located on a 100,000-square-foot sky bridge connecting Mandalay Bay and Luxor. Among its 40 unique venues, you'll find prime retails stores, an impressive Guinness store, the awesomely gelid Minus5 Ice Bar, and a host of delicious eateries.

Centrally located in the heart of the Las Vegas Strip, this retail and entertainment complex boast over 170 stores, 15 restaurants and host live show venues. You'll find a little of everything here, from a Rock Bar & Grill to brand stores like Urban Outfitters, True Religion and even a famed tattoo parlor.


Via Bellagio | The Strip

This world-class shopping center is timelessly extravagant, boasting a premier host of upscale boutiques and stores. Retaining the same dignified, yet beautiful old world charm of its host, the acclaimed Bellagio hotel, Via Bellagio is built around a sophisticated promenade—dominated by a graceful atmosphere. The same atmosphere that is enjoyed by its discerning shoppers, as they tour the likes of Giorgio Armani, Louis Vuitton, Prada, Tiffany & Co. and many others.