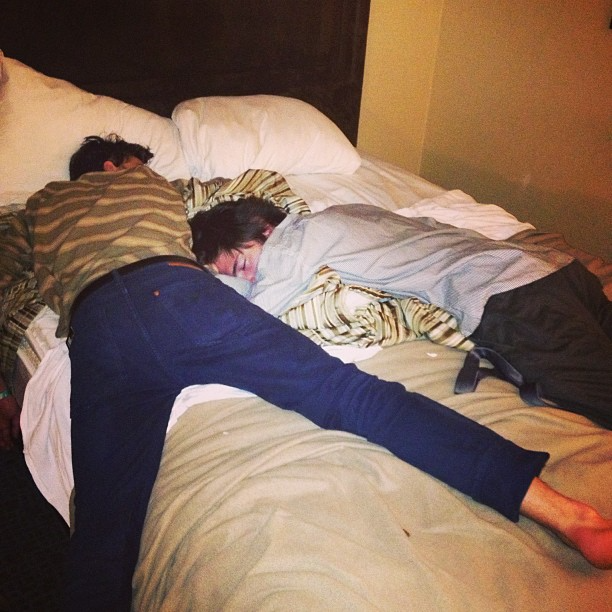 Anything can happen in Las Vegas, which is what makes it extremely fun and extremely dangerous. It’s a city designed for going big, and what’s a better time to go big than a birthday? Search Reddit’s r/Vegas forums and you’ll find a ton of insane stories about how celebrating your birthday in Vegas can go sideways. Here are some of the wildest ones.

Ten Drinks Too Many
“Me and six mates went to Vegas for our 21st birthday. We went to Cat House in Luxor for some drinks. It ended up 10 too many drinks and one guy got taken out of the club because he threw up and fell asleep on the table. We went back to the room a few hours later and he wasn’t there! We sent out a search party and told hotel security. Half an hour later, during the after party, we got a knock on the door. [It was] two burly security guards with our mate in a wheelchair. They tipped him on the bed and said, ‘I think this is yours! He was so drunk and was found outside the right room, but three floors too high!’”—Mikluvinb

Put Your Chips on 26
“My last night in Vegas of a three-day weekend with about a dozen friends, I was playing roulette at a low-ball table after all my friends went to bed. I was about to cash out and go back to my hotel when a new guy sat at the table and said ‘Tonight’s my 26th birthday!’ and put a stack of chips on 26. I felt like f*ck it and put the rest of my chips (about $20 worth) on 26 and said ‘Happy birthday dude.’ [When] 26 hit, he and his friends went nuts and I made enough back to pretty much break even on my gambling for the weekend.”—hatecopsandcats

Housekeeping’s Worst Nightmare
“Stayed at Planet Hollywood for a buddy’s birthday. Friend got super drunk, fell through the shower, and cut up his shoulder/arm pretty bad. Security and paramedics were called to the room to address the situation. While asking friend questions about what happened, he gives them false names and begins to blames others for the accident. While [my] friend is getting put onto the gurney, he tries to fight security and paramedics. They get him strapped in and wheel him out to the ambulance. Meanwhile, the room was deemed hazardous due to all the broken glass and blood, so we had to change rooms at 4 a.m. We had to move all [the] luggage and booze to another suite at the opposite end of the hotel, while we were still drunk.”—Canigs23

Shame Plants
“I didn’t do any gambling while I was [in Vegas] for my birthday last year, but I got as drunk as a skunk like you’re supposed to. I woke up the next morning very discombobulated, covered in soil, and surrounded by plants. Apparently, I had been stumbling around the city pulling leaves off of succulents and cacti, and repeatedly telling my friend that ‘It’s my birthday, these are my birthday presents to me.’ I still have two of them that have grown really well, I call them my shame plants. So I guess what happens in Vegas stays in Vegas unless you take it home and put it in soil?”—oblongturtle

Thanks Dad
“To make a VERY long story short: [it] was my 21st birthday…took one too many shots, woke up [next] to a very attractive guy I didn’t know, looked in the mirror when I snuck out and could compare myself to a raccoon, but ugly. Lost my ID, which was in my wallet with my debit card and my social security card. Called my dad crying about it, he had to drive down to Vegas and help me out with everything and we ended up going home. All in all, it was one hell of one whole night and half a day.”—Loves_me_tacos125

Brother Meets a Mother
“I went to Vegas as an 18-year-old and needless to say, I had fun with eight others. We had an MGM Sapphire Suite which was comforting for someone who couldn’t get into nightclubs. I spent most of the time as a tourist, but my friends were out and about. My brother, however, was the craziest I’ve ever witnessed. He separated himself from the rest of us. We lost him for three straight days. I ended up finding him in the MGM lobby, on the last day we had to leave, with a random MILF. He wouldn’t stop telling me ‘She’s my wife, I love her,’ which she was very okay with. I kept telling him ‘We have to fly in two hours, get it together.’ He says ‘No problem, I’ll make it without a problem.’ He didn’t. He missed his flight that day and when my dad saw that he wasn’t with me, hell was certainly raised. I had fun.—adzic

Best Night Ever
“Me and a girlfriend went to Vegas for her 21st birthday and decided to go to Sapphires. We’re used to strip clubs where girls get in for free, so we were quite surprised to find out they wanted us to pay $35 to get in. We had just paid $15 for a cab to get there and had spent over an hour getting ready—we looked hot and wanted to have a good night so we decided to pay it. The place was packed and when we finally ordered drinks, bottom shelf mixed drinks were $20! So, we didn’t order drinks and just decided to go get our money back and to leave. My friend, let’s call her Katie, is a shy introvert and will do anything to avoid confrontation so she didn’t even want to ask for our money back, but I wasn’t going to put up with that. I asked the receptionist for a refund, which she refused. She got her boss, who also refused, so I asked for the guy who ran the place and they said I’d have to wait a half hour to talk to him. I waited. A big, ripped guy with a name along the lines [of] “Slayer” comes out and asked what my concern was. I explained why I was upset and that I wanted a refund so we could leave. He explained to me that in Vegas they actually pay taxi drivers a lot of money to drop off girls even if we already paid them. So that he would be losing money if we left. Instead, he offered us a VIP table with three rounds of drinks and a shot for free. That was enough for me, we stayed just long enough to drink our drinks and then decided to go see the Calvin Harris show. We were tipsy and it took us a while to find the venue and by the time we go there, it was closed. Two cute bouncers saw us trying to get in and told us we missed the show, but said they were done with their shift and were going to a party if we wanted to come. So we did. We walked to the one guy’s car, a nice Porsche Boxster, and got in. Katie had to sit on my lap in the passenger side and the other guy said he would meet us there. They took us to a club way off the strip that looked like it was closed. They had a password to get in and, once we went inside, it was amazing. Club lights, strippers, full bar, and food service. And everything was free! We got free lap dances, free drinks, free sushi, anything we wanted. The guys never made any moves on us, they never tried hitting on us or did anything to make us uncomfortable. They were complete gentleman the whole time and said they just wanted to make sure we had fun. We stayed there until 5 a.m. having a great time and then they called us a cab to get back to our hotel. Best night of my life. Never got either of those guys names.”—pwnkakeswce